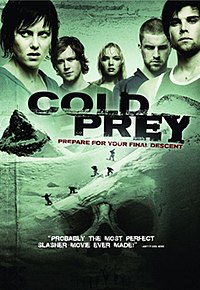 Cold Prey (, lit. "Open Season") is a 2006 Norwegian slasher film directed by Roar Uthaug. It premiered in Norway on October 13, 2006, received positive reviews, and was hailed as one of the best modern Norwegian horror movies.

As the film begins, a boy with a large birthmark covering one eye runs frantically through a blizzard in Jotunheimen, being pursued by an unknown entity. Eventually, he stumbles, and his unseen pursuer catches up to him. Despite his pleas, the person proceeds to bury him alive in the snow.