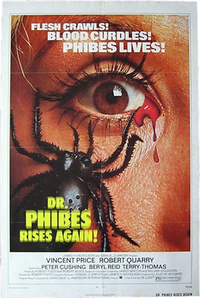 Dr. Phibes Rises Again is a 1972 British horror-dark comedy film, produced by Louis M. Heyward, directed by Robert Fuest, that stars Vincent Price and Robert Quarry. The film is a sequel to The Abominable Dr. Phibes (1971). After seeking vengeance on the doctors whom he blamed for his wife's death in the first film, Phibes returns to seek eternal life in Egypt, while he pursues a centuries-old man who holds the ancient secrets that Phibes needs.

Following his murderous quest for vengeance in the previous film, Dr. Anton Phibes eludes capture by placing himself in suspended animation in a sarcophagus shared with his wife's body. He plans to return when the Moon enters into a specific alignment with the planets not seen in 2,000 years. Three years later, the conjunction occurs and Phibes rises from his sarcophagus. Summoning his silent assistant Vulnavia (Valli Kemp, replacing Virginia North), Phibes prepares to take Victoria's body to Egypt; there, in a hidden temple, flows the River of Life, promising resurrection for Victoria and eternal life for them both. Emerging from his basement, Phibes discovers that his mansion has been demolished. A safe, containing an ancient papyrus map to the river, is now empty.