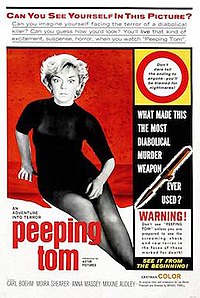 Peeping Tom is a 1960 British psychological horror-thriller film directed by Michael Powell, written by Leo Marks, and starring Carl Boehm, Anna Massey, and Moira Shearer. The film revolves around a serial killer who murders women while using a portable film camera to record their dying expressions of terror. Its title derives from the expression "peeping Tom", which describes a voyeur.

In London, Mark Lewis (Carl Boehm) meets Dora (Brenda Bruce), a prostitute, covertly filming her with a camera hidden under his coat. Shown from the point of view of the camera viewfinder, he follows the woman into her flat, murders her, and later watches the film in his den. The following morning, Lewis films the police's removal of Dora's corpse from her home, posing as a reporter.