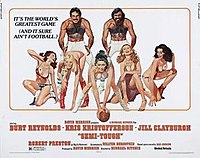 Wide receiver Marvin "Shake" Tiller and running back Billy Clyde Puckett are football buddies who play for a Miami pro team owned by Big Ed Bookman (Preston). Bookman's daughter Barbara Jane is roommates with both men, and the film depicts a subtle love triangle relationship between Barbara Jane and her two friends. She initially has romantic feelings for Shake, who has become more self-confident after taking self-improvement training from seminar leader Friedrich Bismark. The program is called Bismark Energy Action Training, or B.E.A.T. After Shake completes his course, Barbara Jane and he sleep together and start a relationship. Barbara Jane is not a follower of B.E.A.T., and Shake is warned by his leader Bismark that "mixed marriages don't work."