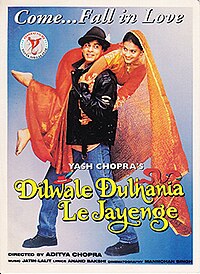 Dilwale Dulhania Le Jayenge, also known by the initialism DDLJ, is a 1995 Indian Hindi-language musical romance film written and directed by Aditya Chopra in his directorial debut and produced by his father Yash Chopra. Released on 20 October 1995, the film stars Shah Rukh Khan and Kajol. The plot revolves around Raj and Simran, two young non-resident Indians, who fall in love during a vacation through Europe with their friends. Raj tries to win over Simran's family so the couple can marry, but Simran's father has long since promised her hand to his friend's son. The film was shot in India, London, and Switzerland, from September 1994 to August 1995.

Raj Malhotra and Simran Singh are both non-resident Indians (NRI) living in London. Simran is brought up in a strict and conservative household by her parents Baldev Singh and Lajwanti while Raj is raised by his liberal father Dharamvir Malhotra. Simran always dreams of meeting her ideal man; her mother Lajjo warns her against this, saying dreams are good, but one should not blindly believe they come true. One day, Baldev receives a letter from his friend Ajit, who lives in Punjab, India. Ajit wants to keep the promise he and Baldev made to each other 20 years ago — to have Simran marry his son Kuljeet. Simran is disappointed, as she does not want to marry someone whom she has never met.