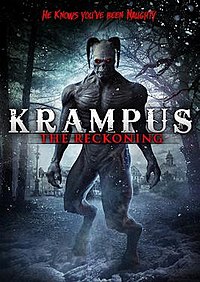 Krampus: The Reckoning (also known as The Hunted) is a 2015 American horror film written and directed by Robert Conway, and co-written by Owen Conway. Released direct-to-video, the film stars Monica Engesser as a child psychologist who is attempting to unravel the link between a mysterious young girl (Amelia Haberman) and the mythological creature known as Krampus (William Connor).

One Christmas, a woman tells her granddaughter, Zoe Weaver, about Krampus. Zoe is placed in foster care after the death of her parents, and is eventually adopted by an abusive couple, who she kills using homemade, Voodoo doll-like effigies that can bring forth Krampus. While at a hospital, Zoe is interviewed by a child psychologist named Rachel Stewart, and uses her dolls to summon Krampus to murder a pedophilic orderly, as well as the negligent, alcoholic father of a fellow patient named Ashley.