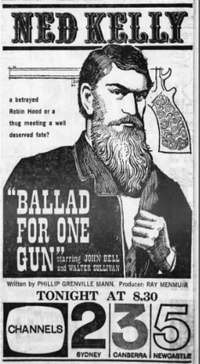 Ballad for One Gun is a 1963 Australian television film about Ned Kelly broadcast on ABC. It was originally aired 17 July 1963 in Sydney and shown at later dates in other parts of Australia. It was written by Phillip Grenville Mann. The director Ray Menmuir called it "“definitely a new approach and a new treatment of the whole Ned Kelly legend."

The story of Ned Kelly which made him out to be "a dangerous embryo dictator, murderously vindictive and swaggeringly brutal in his hour of power." John Bell played Kelly but his face was never shown, he was only heard behind a mask.