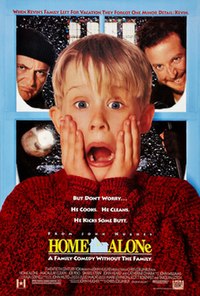 Home Alone is a 1990 American Christmas comedy film directed by Chris Columbus and written and produced by John Hughes. The first film in the Home Alone franchise, the film stars Macaulay Culkin, Joe Pesci, Daniel Stern, John Heard, and Catherine O'Hara. Culkin plays Kevin McCallister, a boy who defends his suburban Chicago home from burglars after his family accidentally leaves him behind on their Christmas vacation to Paris.

The McCallister family is preparing to spend Christmas in Paris, gathering at Kate and Peter's home in a Chicago suburb on the night before their departure. Kate and Peter's youngest son, Kevin, is the subject of ridicule by his older siblings and cousins. Kevin inadvertently ruins the family dinner after a brief scuffle with his oldest brother Buzz, in which Kevin's airplane ticket is accidentally thrown away, resulting in Kate sending him up to the attic. Kevin berates his mother for allowing the rest of the family to pick on him and wishes that his family would disappear. During the night, heavy winds create a power outage, disabling the alarm clocks and causing the family to oversleep. In the confusion and rush to get to the airport, Kevin is accidentally left behind.