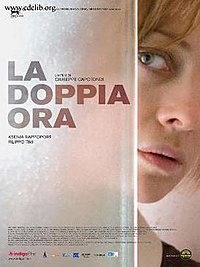 The Double Hour is a 2009 Italian romantic thriller film. It is directed by Giuseppe Capotondi, produced by Francesca Cima and Nicola Giuliano, and stars Filippo Timi and Kseniya Rappoport. Principal photography began in October 2008 in Turin, Italy. The film opened in Italy on October 9, 2009, after premiering in competition at Venice Film Festival in September 2009, where it eventually won the Volpi Cup award for Best Actress for Rappoport. It was also screened at the 2009 Toronto Film Festival. Samuel Goldwyn Films released The Double Hour in the US on April 15, 2011.

Sonia (Ksenia Rappoport), a maid in a hotel in Turin, is cleaning a guest's bathroom when the guest apparently jumps out the bedroom window to her death.