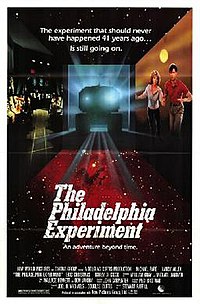 The Philadelphia Experiment is a 1984 American science fiction film. It is directed by Stewart Raffill and stars Michael Paré, Bobby Di Cicco, Kene Holliday and Nancy Allen and based on the urban legend of the Philadelphia Experiment. In 1943, United States Navy sailors David Herdeg (Paré) and Jim Parker (Di Cicco) are thrown forward in time to the year 1984 when a scientific experiment being performed aboard the USS Eldridge suffers a catastrophe. The film follows the two men as they attempt to survive the future and race against time to put an end to the experiment that now threatens the fate of the entire world.

In 1943, United States Navy sailors David Herdeg and Jim Parker serve aboard destroyer escort USS ''Eldridge'', docked in Philadelphia. Doctor James Longstreet and his team conduct an experiment to render the ship invisible to radar, but a malfunction causes the ship to disappear. David and Jim's attempts to stop the experiment fail and they jump overboard to escape.