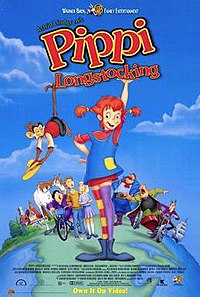 The film begins with Pippi sailing around the world with her father, Captain Efraim Longstocking, her pet horse, Horse, her pet monkey, Mr. Nilsson, and various members of the ship's crew. One night during a hurricane, the captain is washed over board into the sea. As he drifts off, he calls to Pippi that he will "meet her in Villa Villekulla". To that effect, Pippi and her pet animals make their way home, Villa Villekulla, to await his return. Not long after arriving, she makes friends with the two children across the street — Tommy and Annika, who are captivated by her free spirit and fun-loving attitude. They soon convince her to go to school (for the first time in her life) where she gets into trouble, despite winning the hearts of her classmates.