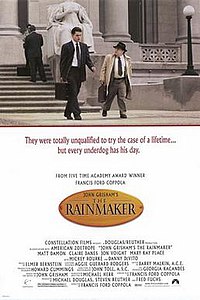 Rudy Baylor is a graduate of the University of Memphis Law School. Unlike most of his fellow grads, he has no high-paying job lined up and is forced to apply for part-time positions while serving drinks at a Memphis bar. Desperate for a job, he is introduced to J. Lyman "Bruiser" Stone, a ruthless but successful ambulance chaser, who makes him an associate. To earn his fee, Rudy is required to hunt for potential clients at a local hospital. He meets Deck Shifflet, a less-than-ethical former insurance assessor-turned-paralegal who has failed the bar exam six times. However, Deck is resourceful in gathering information and is an expert on insurance lawsuits.