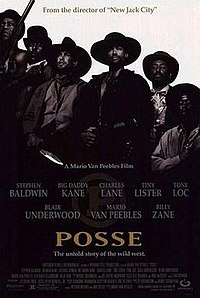 Posse is a 1993 American revisionist Western film directed by and starring Mario Van Peebles. Featuring a large ensemble cast, the film tells the story of a posse of African-American soldiers and one ostracized white soldier, who are all betrayed by a corrupt colonel. The story starts with the group escaping with a cache of gold, and continues with their leader Jessie Lee (Mario Van Peebles) taking revenge on the men who killed his preacher father. The story is presented as a flashback told by an unnamed old man (Woody Strode). The title of the film refers to a group of people who are summoned to help law enforcement officers. This film was the first film to be released by Gramercy Pictures.

In 1898, Buffalo Soldiers from the U.S. Army's 10th Cavalry Regiment, led by Jesse Lee (Mario Van Peebles), are fighting in the Spanish–American War in Cuba. As the segregated African-American unit is barely holding its own against constant attacks from enemy troops, Jesse runs back to the command post of the corrupt and racist Colonel Graham (Billy Zane) to request that the 10th Cavalry be allowed to pull back. Colonel Graham orders Jesse to shoot a deserter in exchange for allowing the 10th to retreat. Unable to kill a man in cold blood, Jesse demonstrates excellent marksmanship by shooting the man's cigar from his mouth. Colonel Graham then kills the deserter, and offers Jesse's command of the 10th to Little J (Stephen Baldwin), another White prisoner (the alternative would be to face the firing squad). Graham then orders the 10th to fall back in order to begin another mission, one in which they will be required to wear civilian clothing, as opposed to their Cavalry uniforms. They are ordered to rob a Spanish gold shipment, which is a setup to give the Colonel an excuse to execute the entire 10th Cavalry as deserters. As he meets them with his own cavalry force, his aide Weezie (Charles Lane) causes a distraction, allowing the 10th to shoot the Colonel and his cavalry down.