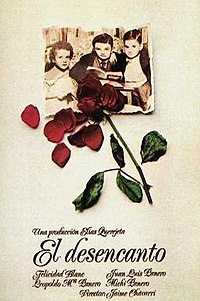 El desencanto (The Disenchantment) is a 1976 Spanish documentary film written and directed by Jaime Chávarri about the family of famous poet Leopoldo Panero. It tells the story of the Panero family told by themselves twelve years after the death of patriarch Leopoldo Panero, a poet of Francoist Spain. The documentary is based on the testimony of the remaining four members: the poet's widow, Felicidad Blanc, and the couple's three sons: Juan Luis, Leopoldo Maria and Michi.