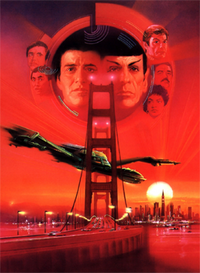 Star Trek IV: The Voyage Home is a 1986 American science fiction film directed by Leonard Nimoy and based on the television series Star Trek. It is the fourth feature installment in the Star Trek franchise, and is a sequel to Star Trek III: The Search for Spock (1984); it completes the story arc begun in Star Trek II: The Wrath of Khan (1982) and continued in The Search for Spock. Intent on returning home to Earth to face trial for their actions in the previous film, the former crew of the finds the planet in grave danger from an alien probe attempting to contact now-extinct humpback whales. The crew travel to Earth's past to find whales who can answer the probe's call.

In 2286, an enormous cylindrical probe moves through space, sending out an indecipherable signal and disabling the power of every ship it passes. As it takes up orbit around Earth, its signal disables the global power grid and generates planetary storms, creating catastrophic, sun-blocking cloud cover. Starfleet Command sends out a planetary distress call and warns all space-faring vessels not to approach Earth.