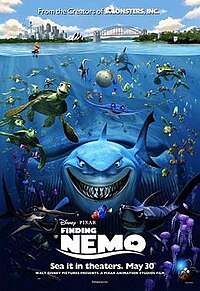 Finding Nemo is a 2003 American computer-animated adventure film produced by Pixar Animation Studios and released by Walt Disney Pictures. Directed and co-written by Andrew Stanton with co-direction by Lee Unkrich, the screenplay was written by Bob Peterson, David Reynolds, and Stanton from a story by Stanton. The film stars the voices of Albert Brooks, Ellen DeGeneres, Alexander Gould, and Willem Dafoe. It tells the story of an overprotective clownfish named Marlin, who, along with a regal blue tang named Dory searches for his missing son Nemo. Along the way, Marlin learns to take risks and comes to terms with Nemo taking care of himself.

Nemo is a young clownfish who lives with his father Marlin in an anemone in the Great Barrier Reef. Nemo, despite being hampered by a lame right fin, is eager to explore life around the ocean. Marlin, however, is overprotective of him, having lost his wife Coral and all their other eggs in a barracuda attack, leaving Nemo as his only child. On Nemo's first day of school, Marlin unintentionally embarrasses him, and while Marlin is distracted with the teacher, Mr. Ray, Nemo defiantly sneaks away from the reef toward a speedboat, where he is captured by a pair of scuba divers. Marlin tries to chase the boat and meets Dory, a blue tang who suffers from acute short-term memory loss, who offers her help. During an encounter with three sharks who have sworn to abstain from eating other fish, Marlin notices a diver's mask that fell from the boat that took Nemo. Marlin and Dory fight over the mask, giving Dory a nose bleed, which sends one of the sharks into a feeding frenzy, and Marlin and Dory narrowly escape, but are knocked unconscious when the sharks accidentally set off a ring of old naval mines.