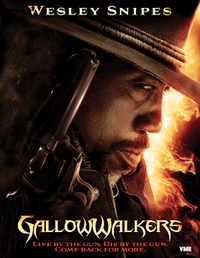 Gallowwalkers is a 2012 American Western horror film written and directed by Andrew Goth, and starring Wesley Snipes, Kevin Howarth, Riley Smith, Tanit Phoenix, Patrick Bergin, and Diamond Dallas Page. Due to Wesley Snipes' tax problems the film went through many changes and delays, and was completed in 2010. It still had no official release until a 2012 screening at the "Film4 FrightFest" festival in the United Kingdom. In 2013 it was released on DVD and Blu-ray in the United States, nearly eight years after the film started production in 2006.

A group of disfigured people gather near a railroad in a desert where they are killed by a mysterious gunslinger named Aman (Wesley Snipes), who also rips out the head and spine from one of the dead bodies.