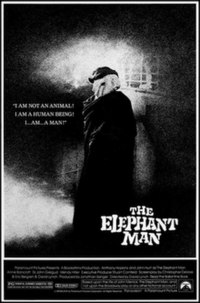 The Elephant Man is a 1980 British-American historical tragedy film about Joseph Merrick (whom the script calls John Merrick), a severely deformed man in late 19th century London. The film was directed by David Lynch and stars John Hurt, Anthony Hopkins, Anne Bancroft, John Gielgud, Wendy Hiller, Michael Elphick, Hannah Gordon, and Freddie Jones. It was produced by Jonathan Sanger and Mel Brooks, the latter of whom was intentionally left uncredited to avoid confusion from audiences who possibly would have expected a comedy.

Frederick Treves, a surgeon at the London Hospital, finds Joseph Merrick in a Victorian freak show in London's East End, where he is kept by Mr. Bytes, a greedy, sadistic, psychopathic, despicable, violent and heartless ringmaster. His head is kept hooded, and his "owner", who views him as intellectually disabled, is paid by Treves to bring him to the hospital for examination. Treves presents Merrick to his colleagues and highlights his monstrous skull, which forces him to sleep with his head on his knees, since if he were to lie down, he would asphyxiate. On Merrick's return, he is beaten so badly by Bytes that he has to call Treves for medical help. Treves brings him back to the hospital.