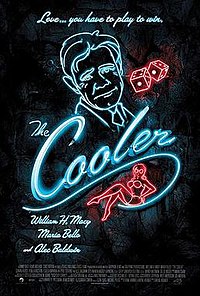 The Cooler is a 2003 American romantic drama film directed by Wayne Kramer. The original screenplay was written by Kramer and Frank Hannah. In old-school gambling parlance, a casino "cooler" is an unlucky individual, usually a casino employee, whose mere presence at the gambling tables usually results in a streak of bad luck for the other players.

Unlucky Bernie Lootz (William H. Macy) works at the Shangri-La casino as a "cooler" - a man with professionally bad luck designed to stop people from winning. A cocktail waitress, Natalie (Maria Bello), takes no notice of Bernie, who is smitten with her. The casino manager, Shelly (Alec Baldwin) prides himself on running a "classically" Vegas casino and resents the new places that attract a lower clientele. The owners, however, hire an advisor named Larry (Ron Livingston) to help bring in more money with techniques contrary to Shelly's outdated policies. Bernie informs Shelly that he's leaving town in a week.