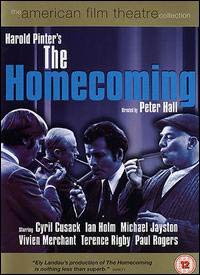 The Homecoming is a 1973 British-American drama film directed by Peter Hall based on the play of the same name by Harold Pinter. The film was produced by Ely Landau for the American Film Theatre, which presented thirteen film adaptations of plays in the United States from 1973 to 1975. The film was screened at the 1974 Cannes Film Festival, but was not entered into the main competition.

Teddy brings his wife home to meet his estranged family.