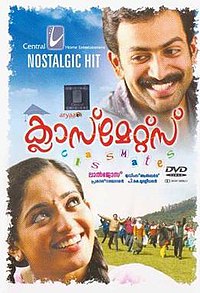 Classmates is a 2006 Indian Malayalam-language coming-of-age romantic film directed by Lal Jose and written by James Albert. The film has an ensemble cast consisting of Prithviraj Sukumaran, Kavya Madhavan, Jayasurya, Indrajith Sukumaran, Narain, Jagathy Sreekumar, Balachandra Menon and Radhika. The music was composed by Alex Paul. The cinematography was by Rajeev Ravi and editing by Ranjan Abraham. Audiography was done by M. R. Rajakrishnan.

The film centres on a group of classmates who attendeded the same Chemistry class in their final year of college. Among them, Murali (Narain) is a singer and P. Sukumaran (Prithviraj) is a firebrand leader of the left-winged students union. Sukumaran's rival, Satheesan (Jayasurya), leads the opposite faction of student politics and is aided by his sidekick, Valu Vasu (Vijeesh). Pius (Indrajith), a rich and spoiled brat of parents settled in the Gulf, is the campus Romeo and Sukumaran's best friend. Thara Kurup (Kavya Madhavan) is the daughter of the Member of the state Legislative Assembly (MLA) from Muvattupuzha; she is a danseuse who regularly wins awards for the college with her performances.