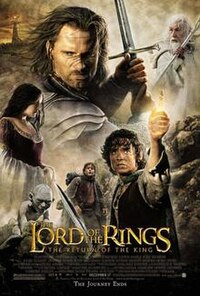 The Lord of the Rings: The Return of the King 2003

The Lord of the Rings: The Return of the King is a 2003 epic fantasy adventure film directed by Peter Jackson, based on the third volume of J. R. R. Tolkien's The Lord of the Rings. The film is the final instalment in the Lord of the Rings trilogy and was produced by Barrie M. Osborne, Jackson and Fran Walsh, from a screenplay by Walsh, Philippa Boyens and Jackson. Continuing the plot of The Two Towers, Frodo, Sam and Gollum are making their final way toward Mount Doom in Mordor in order to destroy the One Ring, unaware of Gollum's true intentions, while Gandalf, Aragorn, Legolas, Gimli and the rest are joining forces together against Sauron and his legions in Minas Tirith. It was preceded by The Fellowship of the Ring (2001) and The Two Towers (2002).

Two Hobbits, Sméagol and his cousin, Déagol, are fishing when Déagol discovers the One Ring in the river. Sméagol's mind is ensnared by the Ring, and he kills his cousin for it. He retreats into the Misty Mountains as the Ring twists his body and mind until he becomes the creature Gollum.