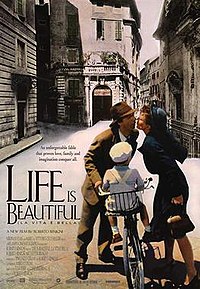 Life Is Beautiful (, ) is a 1997 Italian comedy-drama film directed by and starring Roberto Benigni, who co-wrote the film with Vincenzo Cerami. Benigni plays Guido Orefice, a Jewish Italian bookshop owner, who employs his fertile imagination to shield his son from the horrors of internment in a Nazi concentration camp. The film was partially inspired by the book In the End, I Beat Hitler by Rubino Romeo Salmonì and by Benigni's father, who spent two years in a German labour camp during World War II.

In 1939, in the Kingdom of Italy, Guido Orefice is a young Jewish man who arrives to work in the city (Arezzo, in Tuscany) where his uncle Eliseo runs a restaurant. Guido is comical and sharp and falls in love with a Gentile girl named Dora. Later, he sees her again in the city where she is a teacher and set to be engaged to a rich, but arrogant, man, a local government official with whom Guido has regular run-ins. Guido sets up many "coincidental" incidents to show his interest in Dora. Finally, Dora sees Guido's affection and promise, and gives in, against her better judgment. He steals the lady from her engagement party, on a horse, humiliating her fiancé and mother. They are later married and have a son, Giosuè, and run a bookstore.