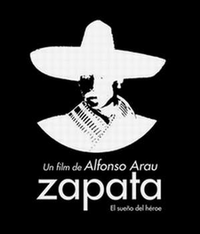 The film happens in the last quarter of the 19th century and the first nineteen years of the twentieth, during the dictatorship of Porfirio Díaz, the presidency of Francisco I. Madero, the military revolt of Victoriano Huerta, the Convention of Generals and, finally, the death of Zapata, already in the constitutionalist stage of Venustiano Carranza. The film does not try to be a chair of history but a fable that obtains the identification of the spectators with the hero, through the successive confrontation of the protagonist with the power, represented in the antagonistic figure of Victoriano Huerta. In it, Emiliano Zapata appears like predestining, "the signal" in his chest, the mark or spot with the form of a little hand is the sign that identifies him as "the one" by the Huehuetlatolli (the heirs of the tradition) to be their guide. Thus, we see the birth of Emiliano, where he is recognized like the possible leader of his town. Zapata will have to break with his vision of the "real reality" and to enter in that other magical knowledge of the Mexican tradition and its inscrutable religious "sincretismo".