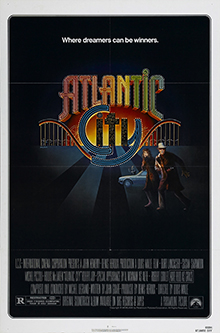 Atlantic City (French: Atlantic City, USA) is a 1980 romantic crime film directed by Louis Malle and starring Burt Lancaster, Susan Sarandon, Kate Reid, Robert Joy, Hollis McLaren, Michel Piccoli, and Al Waxman. A Canadian-French co-production filmed in late 1979, it was released in France and Germany in September 1980 and in the United States later that year by Paramount Pictures. The script was written by John Guare.

Sally Matthews is a young waitress in an Atlantic City casino who has dreams of becoming a blackjack dealer in Monte Carlo. Sally's pregnant sister and estranged husband David return to her one day with the intention of selling a large amount of cocaine that he has stolen in Philadelphia. Sally is outraged to see him, as he had impregnated her sister and run off with her. Dave meets Lou, an aging former gangster who lives in Sally's apartment building and runs a numbers game (an illegal lottery) in poor areas of the city; he also acts as a caretaker for Grace, a seemingly bedridden, aging beauty whose gangster husband he used to work under, and who constantly berates and demeans him. Dave convinces Lou to sell the cocaine for him, but as Lou sells the first batch, Dave is attacked and killed by the mobsters from whom he had stolen the drugs.