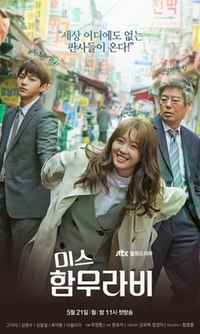 Ms. Hammurabi is a 2018 South Korean television series written by Moon Yoo-seok, the chief judge of Seoul Eastern District Court, and starring Go Ara, Kim Myung-soo and Sung Dong-il. It is based on the screenwriter's own novel of the same name, which was first serialized in 2015 on The Hankyoreh and was later published in paperback form in 2016 by Munhakdongne Publishing Group. It aired on JTBC's Mondays and Tuesdays at 23:00 (KST) time slot from May 21 to July 16, 2018 for 16 episodes.