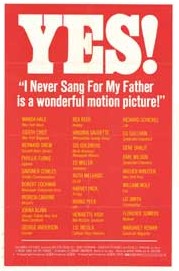 I Never Sang for My Father is a 1970 American drama film based on a 1968 play of the same name, which tells the story of a widowed college professor who wants to get out from under the thumb of his aging father yet still has regrets about his plan to leave him behind when he remarries and moves to California. It stars Melvyn Douglas, Gene Hackman, Dorothy Stickney, Estelle Parsons, and Elizabeth Hubbard.

After picking them up at the airport, college professor Gene Garrison spends the evening at home with his parents. The barbs of his father, Tom, run through his mind as he drives home. Gene seeks solace in the arms of his mistress, who pines for a more serious relationship with him. Soon after, his mother, Margaret, suffers a heart attack and is hospitalized. Upon visiting her at the hospital, Gene finds Tom pacing in the waiting room. Tom asks Gene to go to the Rotary Club with him, though Gene was expecting not to leave his mother's side.