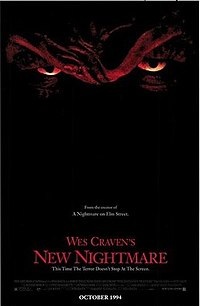 Wes Craven's New Nightmare (also known simply as New Nightmare) is a 1994 American meta slasher film written and directed by Wes Craven, creator of 1984's A Nightmare on Elm Street. A standalone film and the seventh installment in the A Nightmare on Elm Street franchise, it is not part of the same continuity as previous films, instead portraying Freddy Krueger as a fictional movie villain who invades the real world and haunts the cast and crew involved in the making of the films about him. In the film, Freddy is depicted as closer to what Craven originally intended, being much more menacing and less comical, with an updated attire and appearance.

Heather Langenkamp lives in Los Angeles, California, with her husband Chase and their young son Dylan. She is recognized for her role as Nancy Thompson from the ''A Nightmare on Elm Street'' film series before focusing her career on television. One night, she has a nightmare that her family is attacked by a set of animated Freddy Krueger claws from an upcoming Nightmare film, where two workers are brutally killed on set. Waking up to an earthquake, she spies a cut on Chase's finger exactly like the one he had received in her dream, but she quickly dismisses the notion that it was caused by the claws.