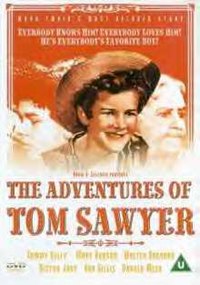 The Adventures of Tom Sawyer 1938

The Adventures of Tom Sawyer is a 1938 American drama film produced by David O. Selznick and directed by Norman Taurog who had previously directed Huckleberry Finn (1931 film) (1931) with Jackie Coogan and Junior Durkin. The film starred Tommy Kelly in the title role, with Jackie Moran and Ann Gillis. The screenplay by John V. A. Weaver was based on the classic 1876 novel of the same name by Mark Twain. The movie was the first film version of the novel to be made in color.

The United Artists release includes most of the sequences familiar to readers of the book, including the fence-whitewashing episode; a wild raft ride down the Mississippi River; Tom and Huckleberry Finn's attendance at their own funeral, after the boys, who were enjoying an adventure on a remote island, are presumed dead; the murder trial of local drunkard Muff Potter; and Tom and Becky Thatcher's flight through a cave as they try to escape from Injun Joe, who is revealed to be the real killer.