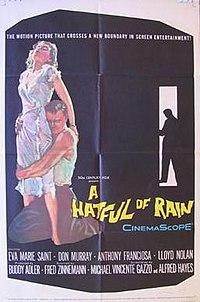 A Hatful of Rain is a 1957 American drama film about a young married man with a secret morphine addiction, based on a 1955 Broadway play of the same name. It is a medically and sociologically accurate account of the effects of morphine on an addict and his family. The frank depiction of drug addiction in a feature film was a rarity for its time.

In a housing project apartment in New York City near the Brooklyn Bridge, Johnny Pope (Don Murray) lives with his pregnant wife Celia (Eva Marie Saint) and his brother Polo (Anthony Franciosa). Johnny is a veteran recently returned from the Korean War, in which he sustained an injury while surviving for days trapped in a cave. His survival made him a hero in the newspapers, but his ensuing recuperation in a military hospital left him secretly addicted to the painkiller morphine, with Polo his only family member aware of his condition.