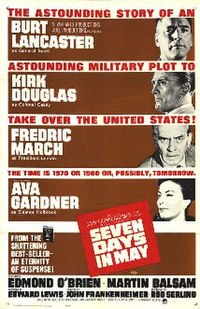 Seven Days in May is a 1964 American political thriller film about a military-political cabal's planned takeover of the United States government in reaction to the president's negotiation of a disarmament treaty with the Soviet Union. The picture, starring Burt Lancaster, Kirk Douglas, Fredric March, and Ava Gardner, was directed by John Frankenheimer from a screenplay written by Rod Serling and based on the novel of the same name by Fletcher Knebel and Charles W. Bailey II, published in September 1962.

The story is set in 1970, six years in the future at the time of the film's 1964 release, and the Cold War is still a problem (in the 1962 book, the setting was May 1974 after a stalemated war in Iran). U.S. President Jordan Lyman has recently signed a nuclear disarmament treaty with the Soviet Union, and the subsequent ratification by the U.S. Senate has produced a wave of dissatisfaction, especially among Lyman's opposition and the military, who believe the Soviets cannot be trusted.