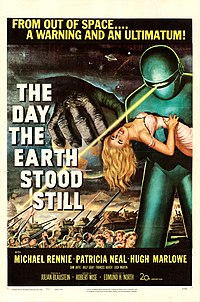 The Day the Earth Stood Still 1951

The Day the Earth Stood Still (a.k.a. Farewell to the Master and Journey to the World) is a 1951 American black-and-white science fiction film from 20th Century Fox, produced by Julian Blaustein and directed by Robert Wise. The film stars Michael Rennie, Patricia Neal, Hugh Marlowe, Sam Jaffe, Billy Gray, Frances Bavier and Lock Martin. The screenplay was written by Edmund H. North, based on the 1940 science fiction short story "Farewell to the Master" by Harry Bates, and the film score was composed by Bernard Herrmann.

When a flying saucer lands in Washington, D.C., the U.S. Army quickly surrounds it. A humanoid emerges and announces that he comes "in peace and with good will". When he unexpectedly opens a small device, he is shot and wounded by a nervous soldier. A tall robot emerges from the saucer and quickly disintegrates the Army's weapons. The alien orders the robot, Gort, to desist. He explains that the now-broken device was a gift for the President of the United States that would have enabled him "to study life on the other planets".