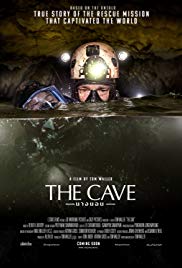 The Cave (known in Thai as Nang Non, ) is a 2019 Thai action-drama film about the 2018 Tham Luang cave rescue in Chiang Rai Province, Thailand, written and directed by Tom Waller and co-produced by Waller and Allen Liu. The story is written from the points of view of several individuals involved in the rescue operation, and features cave diver Jim Warny and others as themselves. The film premiered at the 2019 Busan International Film Festival, and was released in Thailand on 21 November.