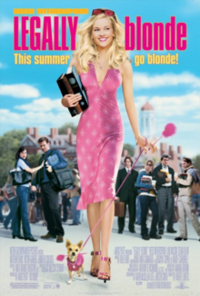 Legally Blonde is a 2001 American comedy film directed by Robert Luketic in his feature-length directorial debut. Written by Karen McCullah Lutz and Kirsten Smith from Amanda Brown's 2001 novel of the same name, it stars Reese Witherspoon, Luke Wilson, Selma Blair, Matthew Davis, Victor Garber, and Jennifer Coolidge. Witherspoon plays Elle Woods, a sorority girl who attempts to win back her ex-boyfriend Warner Huntington III by getting a Juris Doctor degree at Harvard Law School, and in the process, overcomes stereotypes against blondes and triumphs as a successful lawyer through unflappable self-confidence and fashion/beauty knowhow.

Fashion merchandising student and sorority girl Elle Woods is taken to an expensive restaurant by her boyfriend, the governor's son, Warner Huntington III. She expects Warner to propose, but he breaks up with her instead. He intends to go to Harvard Law School and become a successful politician, and believes that Elle is not "serious" enough for that kind of life. Elle believes she can win Warner back if she shows herself capable of achieving the same things. After months of studying, Elle scores a 179 on the Law School Admission Test and, combined with her 4.0 GPA, is accepted to Harvard Law School.