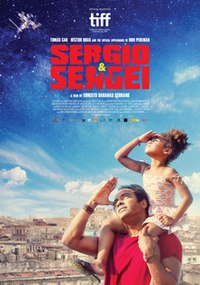 Sergio and Sergei is a 2017 Cuban drama film directed by Ernesto Daranas. It was selected as the Cuban entry for the Best Foreign Language Film at the 91st Academy Awards. However, it was not on the final list of submitted films released by Academy of Motion Picture Arts and Sciences in October 2018.

Sergio is a professor of Marxist philosophy at Havana. He is also a radio ham. His Jewish-American contact Peter sends him a modern radio. Through it, Sergio contacts and befriends Sergei, a Soviet cosmonaut in Mir space station. Meanwhile, a failed coup brings the end of the Soviet Union. Sergei has to wait until the new Russia can rescue him. Sergio endures the hardships of post-Soviet Cuba.