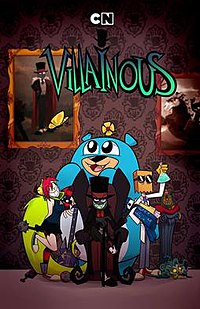 Villainous is a Mexican animated web series created by Alan Ituriel. It is based on a 2012 web series of the same name which he had previously created and was initially picked up by Cartoon Network Latin America as a miniseries of ten one-minute episodes for the Cartoon Network Anything app (further episodes, along with a series of specials, began to be released later). The series is co-produced by CN and A.I. Animation Studios.

Villainous is the story of Black Hat Org., run by Evil Handyman Black Hat (whose name is a synonym for villain, a reference to black-hatted evil cowboys from western movies) and his team of three less-villainous aides. Black Hat is trying to sell various evil inventions created by Dr. Flug and desperate to achieve his evil aspirations. However, things usually end up going wrong for him as the brilliant innovations tend to have small and often comical flaws.