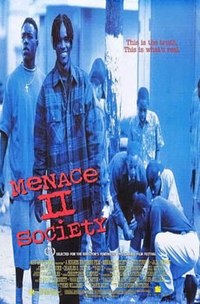 Menace II Society (pronounced Menace to Society) is a 1993 American teen hood drama film directed by Allen and Albert Hughes in their directorial debut, and starring Tyrin Turner, Jada Pinkett, Larenz Tate and Samuel L. Jackson. The film is set in Watts, Los Angeles, and follows the life of a young man named Kaydee "Caine" Lawson and his close friends. It gained notoriety for its scenes of violence, profanity and drug-related content. It also received positive reviews for its realistic portrayal of urban violence and powerful underlying messages.

The film begins with Kaydee “Caine” Lawson and his best friend Kevin "O-Dog" Anderson entering a liquor store to buy some malt liquor, where a Korean cashier and his wife rush them to pay for their drinks and leave. After their purchase, the cashier insults O-Dog by saying, "I feel sorry for your mother." Offended, O-Dog briefly argues with the cashier, then kills him and his wife with his gun, takes the surveillance tape, robs the clerk's wallet and the cash register, and flees the store with Caine.