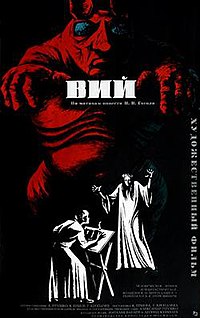 Viy (Spirit of Evil or Vii, ) is a 1967 Soviet horror film directed by Konstantin Yershov and Georgi Kropachyov. Based on the story of the same name by Nikolai Gogol, the film's screenplay was written by Yershov, Kropachyov and Aleksandr Ptushko. The film was distributed by Mosfilm, and was the first Soviet-era horror film to be officially released in the USSR.

As a class of seminary students are sent home for vacation, three of them get lost on the way in the middle of the night. One spots a farmhouse in the distance, and they ask the old woman at the gate to let them spend the night. She agrees, on the condition that they sleep in separate areas of the farm. As one of them, Khoma Brutus, lies down in the barn to sleep, the old woman comes to him and tries to seduce him, which he staunchly refuses. She puts him under a spell, and makes him lie down so she can climb on his back. She then rides him around the countryside like a horse. Khoma suddenly finds that they are flying and realizes she is a witch. He demands that she put him back down, and as soon as they land, he grabs a stick and beats her violently. As she cries out that she's dying, he looks and sees she has turned into a beautiful young woman. Horrified, he runs back to his seminary, where he finds the Rector has sent for him. Khoma is told that a rich merchant has a daughter who is dying and needs prayers for her soul, and that she specifically asked for Khoma by name. He refuses to go, but the Rector threatens him with a public beating, so he relents and finds he is returning to the farm where he met the witch. The girl dies before he gets there, and to his horror, he realizes she is the witch, and that he is the cause of her death (but he tells no one). The girl's father promises him great reward if he will stand vigil and pray for her soul for the next three nights. If he does not, grave punishment is implied. After the funeral rites, Khoma is told of a huntsman who fell in love with the young girl, and how when she came into the stable and asked his help to get on her horse, he said he would like it more if she rode on his back, then took her on his back and ran off with her, reminding Khoma of his encounter (the men telling the tale suspect the girl was a witch). He is taken to the chapel where the girl's body lies and is locked in for the night.