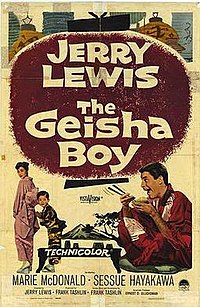 The Geisha Boy is a 1958 American comedy film starring Jerry Lewis, distributed by Paramount Pictures. Filmed from June 16 to August 7, 1958, it had its first screening in New York City on December 19, 1958. This film marked the film debut of Suzanne Pleshette.

Gilbert "The Great" Wooley (Jerry Lewis) is a down-on-his-luck magician who has been invited to entertain GIs in Japan. However, even before his flight from Los Angeles has taken off the ground, he unwittingly – and with some participation of his pet, friend and co-star in the act, Harry the rabbit – incurs the wrath of the show's headliner, actress Lola Livingston (Marie McDonald), with a series of unfortunate accidents. Upon their arrival, as he tries to apologize to Lola, he causes her more embarrassment by tearing up her dress, knocking her down the gangway, and rolling her up in the red carpet to cover up her lack of proper attire.