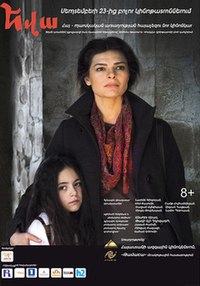 Yeva (in Armenian Եվա, in Persian یه‌وا) is a 2017 Armenian drama film directed by Armenian-Iranian filmmaker Anahit Abad. The joint Iranian and Armenian produced film financed by the National Cinema Center of Armenia and Iran's Farabi Cinema Foundation is Anahid Abad's first long film feature. It was selected as the Armenian entry for the Best Foreign Language Film at the 90th Academy Awards held in 2018 but it was not nominated.

After her husband's death, a young woman flees Yerevan to the Artsakh Republic with her daughter to escape her in-laws, but events follow her there.