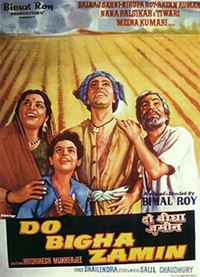 Do Bigha Zamin is a 1953 Indian Hindi-language drama film directed by Bimal Roy. Based on Rabindranath Tagore's Bengali poem "Dui Bigha Jomi", the film stars Balraj Sahni and Nirupa Roy in lead roles. Known for its socialist theme, it is considered an important film in the early parallel cinema of India, and a trend setter.

The story revolves around a farmer, Shambu Mahato (Balraj Sahni), who lives with his wife Parvati ("Paro" (Nirupa Roy)) and son Kanhaiya (Ratan Kumar) in a small village that is hit by drought. After years of drought and famine, the region finally gets rain, leading the farmers to rejoice. Shambu owns two bighas of land (a bigha being the equivalent of two-thirds of an acre of land), which is the only means of livelihood for the whole family. The local zamindar (landlord) Thakur Harnam Singh (Murad) partners with some businessmen to construct a mill on his large parcel of land, which in return, he opines, would bring them profit and bring prosperity to the village. The only problem is that in the middle of Harnam Singh's land lies Shambu's meager two bighas of land.