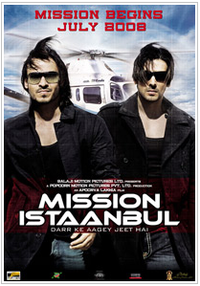 Mission Istanbul is a 2008 action thriller film starring Vivek Oberoi, Shriya Saran and Zayed Khan. The film, directed by Apoorva Lakhia, features Abhishek Bachchan in a special appearance. The Film is based on an organisation Al Johara which bears a resemblance to Qatar-based news channel Al Jazeera which was criticized by the White House as being an outlet for terrorists. The film deals with the role of Al Johara based in Turkey, a NATO country with troops engaged in Afghanistan, and the role of Indian Intelligence agency R.A.W..It was unofficial remake of Hollywood film Enemy of the State (film).It was clashed with another bollywood film Money Hai Toh Honey Hai and both films were box office disasters.

The story is based on the life of India's top news reporter Vikas Sagar (Zayed Khan). He would do anything for his news report, even risk his life. Ambitious, popular, and professional, Vikas is considered one of the most promising journalists in the business. Due to this reason, Uwais Hussain (Sunil Shetty), a senior producer at the controversial news channel "Al Johara" offers him a job as the head of the channel's India bureau. Vikas is going through a divorce with his wife Anjali (Shriya Saran), and to get his mind of things, Vikas accepts the offer and flies to Istanbul to start work for "Al Johara". Vikas then meets Dr. Lisa Lobo (Shweta Bhardwaj), at a party, Lisa who is headed to Istanbul to attend a medical convention, it is later revealed that Lisa is a R.A.W. agent looking forward to recruit Vikas.