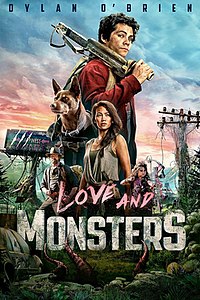 Love and Monsters is a 2020 American monster adventure film directed by Michael Matthews, with Shawn Levy and Dan Cohen serving as producers. The film stars Dylan O'Brien, Jessica Henwick, Dan Ewing, Michael Rooker and Ariana Greenblatt, and follows a young man in a post-apocalyptic world who must make the journey to reunite with his girlfriend.

After the destruction of an asteroid headed for Earth, the chemical fallout causes all cold-blooded animals to mutate into large monsters. During the evacuation of Fairfield, Joel Dawson is separated from his girlfriend Aimee but promises to find her, and his parents are killed.