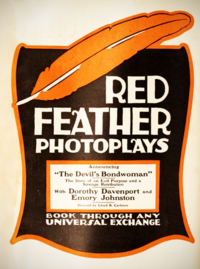 The Devil's Bondwoman is a 1916 American silent drama film directed by Lloyd B. Carleton based on the story by F. McGrew Willis and starring Dorothy Davenport and Emory Johnson. The movie was released on November 20, 1916, by Universal