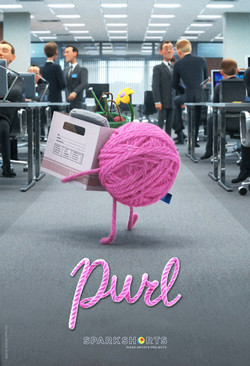 Purl is a 2018 American computer-animated short film directed and written by Kristen Lester with the story written by Michael Daley, Bradley Furnish, Lester, and James Robertson, produced by Pixar Animation Studios, and distributed by Walt Disney Studios Motion Pictures. It is the first short released as part of Pixar's "SparkShorts" program, and focuses on a ball of yarn named Purl, who gets employed in a human-dominant company, which causes her to be ignored by her fellow employees. The short was previewed at SIGGRAPH on August 14, 2018, premiered at the El Capitan Theatre on January 18, 2019 and released on YouTube on February 4, 2019, and on Disney+ on November 12, 2019 to universal acclaim from critics, particularly for its themes.

Purl, a humanoid pink-colored ball of yarn, begins an entry-level position at a company named B.R.O. Capital. While excited at first to work there, she soon realizes that her partners barely notice her, in spite of her attempts to fit in. After being left alone while her coworkers go out for a group lunch, Purl observes from photos of the company's capital team that it is composed entirely of white men in similar power suits and hairstyles. This inspires her to change her appearance and personality to resemble theirs. After the other employees return, Purl, now talking and acting like everyone else, is noticed by her coworkers, who invite her out for drinks. Before the group leaves, however, a yellow-colored ball of yarn named Lacy arrives at the office to begin working. When she notices the new ball of yarn is also ignored, Purl befriends Lacy and invites her to join them for drinks. After some time has passed, Purl has returned to her original appearance, and B.R.O. Capital is shown to be staffed by a more diverse combination of men and balls of yarn, who work together as a team.