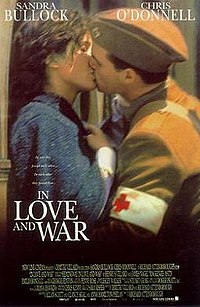 In Love and War is a 1996 romantic drama film based on the book, Hemingway in Love and War by Henry S. Villard and James Nagel. The film stars Sandra Bullock, Chris O'Donnell, Mackenzie Astin, and Margot Steinberg. Its action takes place during the First World War and is based on the wartime experiences of the writer Ernest Hemingway. It was directed by Richard Attenborough. The film was entered into the 47th Berlin International Film Festival.

In Italy during World War I, the president of the United States has sendt teams of Red Cross doctors and nurses to boost Italian morale and help care for the wounded. Volunteers drive ambulances and work in the front line canteens. Ernest Hemingway (Chris O'Donnell) a 19-year-old boy, becomes an ambulance driver in Italy, although he wishes to become a reporter and writer. In an attempt to fight against the enemy, he ends up with a broken leg, trying to save a companion from the field. He is taken into a hospital, where an American nurse, Agnes von Kurowsky (Sandra Bullock) takes care of him. During the first night at the hospital, Ernest tells Agnes "i love you. Let's get married", while in a state of delirium. Ernest's health becomes worse and Agnes tries everything to save his leg from what she believes is gangrene. A successful operation returns Ernest to a path of recovery. As time passes by, the two become attached, even though Agnes has reservations about the affair because of their difference in age. Ernest becomes more and more attracted to the nurse as his health slowly returns.