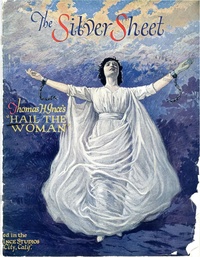 Hail the Woman is a 1921 American silent drama film directed by John Griffith Wray. Produced by Thomas Ince, it stars Florence Vidor as a woman who takes a stand against the hypocrisy of her father and brother, played by Theodore Roberts and Lloyd Hughes respectively.

Oliver Beresford is a controlling and uncompromisingly rigid father. When shameful stories about his daughter Judith surface, he bans her from his house. Her brother David is training for the ministry at his father's insistence, but he has secretly wed Nan Higgins, the stepdaughter of an odd-jobs man, and has fathered a child. Oliver Beresford, learning the truth, buys the silence of the odd-jobs man who then evicts the pregnant Nan from his home. Nan travels to New York where she becomes a prostitute after the baby is born. Seeking a career, Judith also goes to New York where she finds Nan and her baby just as the young woman is dying. Judith decides to raise the child, and later she returns to New England, on the day that David is to be ordained, and confronts him with the child in front of the congregation.