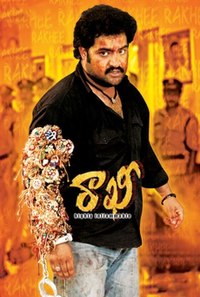 Rakhi or Rakhee is a 2006 Indian Telugu-language action drama film directed by Krishna Vamsi and starring Jr. NTR, Ileana D'Cruz and Charmme Kaur in the lead roles. Suhasini, Sarath Babu, Chandra Mohan, Brahmaji, Kota Srinivasa Rao, Saranya Ponvannan, Brahmanandam, Sunil, and Sayaji Shinde play supporting roles. The music was composed by Devi Sri Prasad with cinematography by S. Gopal Reddy and editing by Shankar. This film was released on 22 December 2006 with 250 prints. The movie was a Hit at the box office . The film was later dubbed into Hindi as The Return of Kaalia in 2007 and into Tamil under the same name.

Ramakrishna aka Rakhi (Jr. NTR) aspires to become a railway stationmaster like his father (Chandra Mohan). His love interest and close friend Tripura (Ileana D'Cruz) is a reporter in a TV channel who exposes atrocities against women in society. For Rakhi, his sister Gayathri (Manjusha) is everything. She is married off to a software professional (Ravi Varma) who plans to go to the USA. However, his uncle brings a proposal where he would get 1 crore as dowry. At first they try to get rid of her by fighting with Rakhi and demanding for more dowry, but when Gayathri overhears them they burn her alive. Devastated by this as she was also pregnant, Rakhi’s family tries to sue them in court but corrupt lawyers, policemen, and doctors fabricate that Gayathri was mentally disturbed and committed suicide. Rakhi unable to take this burns her in-laws and all those who fabricated things about her in front of the court. He then starts a manhunt for all sex offenders and perverted men and burns them alive while dropping a rakhi at every site. A police officer named Meenakshi Iyer (Suhasini) is leading the hunt for him, and the entire police force is under a dilemma as the public women all consider Rakhi to be a god and all men are staying away from women so as to not be killed. Rakhi eventually surrenders to Meenakshi, and goes to jail but it is revealed that he did so to kill his sister’s friend’s murderer, a love crazed man who killed her friend because of repeatedly refusing his proposal. Meenakshi talks to Rakhi after being verbally abused and kicked by a minister whose son also was killed by Rakhi, and she realizes that what Rakhi is doing is correct as the law is protecting all those men from death after abusing women. Rakhi also kills the minister (Sayaji Shinde) after he places a bomb outside Rakhi’s jail that kills many women including his cousin. Rakhi goes to court and the judge (Prakash Raj) also sees that Rakhi did a justice to the country, resigns from his post and announces that he will be Rakhi’s lawyer and get him acquitted.