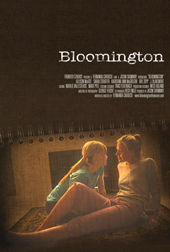 Bloomington is a 2010 coming-of-age drama film about a former child actress (Sarah Stouffer) attending college in search of independence and who ends up becoming romantically involved with a professor, played by Allison McAtee. Their relationship thrives until an opportunity to return to acting forces them to make life-altering decisions.

Jackie Kirk, a former child actress, catches the eye of an infamous, predatory lesbian teacher, named Catherine Stark (McAtee), when Jackie attends college in Bloomington, Indiana. Jackie attempts to fit in with her fellow students, who are in awe of her acting background. After meeting at an on-campus mixer, Catherine and Jackie begin a secret and scandalous affair that draws Jackie away from the college social life. Catherine and Jackie grow closer as they help each other discover more about themselves, when suddenly Jackie gets the chance to return to acting. Catherine becomes uncomfortable with their situation, seeing how it could seemingly never work out, with Jackie having to constantly visit Catherine under the guise of her just being a "friend," as it would be hazardous for both of them for should their romance ever got out.