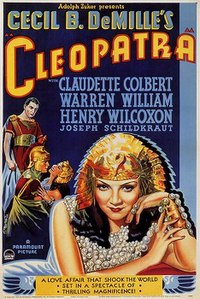 Cleopatra is a 1934 American epic film directed by Cecil B. DeMille and distributed by Paramount Pictures. A retelling of the story of Cleopatra VII of Egypt, the screenplay was written by Waldemar Young and Vincent Lawrence and was based on Bartlett Cormack's adaptation of historical material. Claudette Colbert stars as Cleopatra, Warren William as Julius Caesar, and Henry Wilcoxon as Mark Antony.

In 48 BC, Cleopatra vies with her brother Ptolemy for control of Egypt. Pothinos (Leonard Mudie) kidnaps her and Apollodorus (Irving Pichel) and strands them in the desert. When Pothinos informs Julius Caesar that the queen has fled the country, Caesar is ready to sign an agreement with Ptolemy when Apollodorus appears, bearing a gift carpet for the Roman. When Apollodorus unrolls it, Cleopatra emerges, much to Pothinos' surprise. He tries to deny who she is. However, Caesar sees through the deception and Cleopatra soon beguiles Caesar with the prospect of the riches of not only Egypt, but also India. Later, when they are seemingly alone, she spots a sandal peeking out from underneath a curtain and thrusts a spear into the hidden Pothinos, foiling his assassination attempt. Caesar makes Cleopatra the sole ruler of Egypt, and begins an affair with her.